Bowen Technique influences the Cranial Base and the Cranial Nerves – Part 1 : As Published in ‘In Touch’, the quarterly, in-house journal of the Bowen Therapist Professional Association (BTPA), U.K. Issue 65, Summer 2018

Graham is the principal of Warrnambool Natural Medicine Centre in Victoria, Australia.  He has practiced Bowen Therapy, Naturopathy and Acupuncture for more than twenty five years. He is the author of A Textbook of Bowen Technique – A Comprehensive Guide to the Practice of Bowen Therapy.

Introduction: Tom Bowen described himself as an osteopath and his work embraced fundamental osteopathic principles. In clinic, he constantly sought to optimise the relationship between structure and function with a view to helping each of his patients. Bowen technique can be used to restore function, position and movement to various spinal and pelvic structures thereby influencing the function of the spinal nerves but some of its greatest results are seen when it is used to address dysfunction associated with the bones of the cranial base. When dysfunction affects these structures there may be compromise to the function of the cranial nerves. This article looks at aspects of the technique that may prove helpful in restoring function to these areas.

Overview: The skull serves to house and protect the brain. Twelve pairs of cranial nerves emerge directly from the brain itself before passing out of the skull through specific foramen in the cranial base. These nerves convey information between the brain and the body, particularly to and from the sense organs, the head, face, and neck. 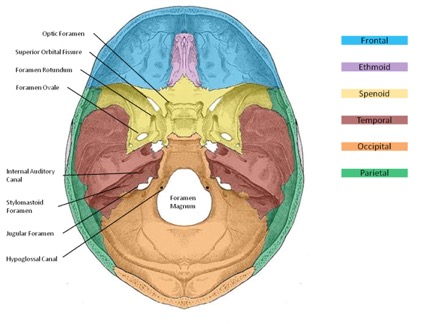 Figure 1:  Foramen of the Cranial Base

Each cranial nerve passes through a specific foramen (See Table 1).

Table 1:  Specific exit for each cranial nerve as it leaves the skull

In situations where the function, position and movement of particular cranial bones are compromised, Bowen technique may prove helpful in restoring function to the Central Nervous System and to the cranial nerves.  The following discussion illustrates this point.

The Facial Nerve (CN VII) passes through the stylomastoid foramen.  This nerve controls the muscles of facial expression.  Clinically, conditions such as idiopathic facial paralysis (Bell’s Palsy) and facial neuralgia may respond well to moves and procedures that resolve abnormal tension in the sternocleidomastoid muscle (see Case Study A).

A 73 year old male presented to the clinic in April, 2016 detailing a history of over 18 months of chronic left-sided facial paralysis that had been diagnosed as Bell’s Palsy.  He had diminished sensation especially on the upper branch of the facial nerve but also on the other branches too.  Quite notably, since the onset of the condition, he had not regained the ability to ‘wrinkle’ his forehead and he still showed very little strength in the muscles under the eye that are associated with the middle branch of the facial nerve.  He had read on the internet that Bowen therapy could help the nerves and so he had come to the clinic to ‘give it a try’.

Assessment of tonal asymmetry revealed that one leg appeared more than an inch shorter than the other.  Screening was unremarkable however the paraspinal tissue on the right side of his neck was terribly tight, as were the left sternocleidomastoid muscle and the right lateral pterygoid and temporalis.

Using Bowen moves to release the sternocleidomastoid and the lateral pterygoid/temporalis produced an immediate response. His tonal asymmetry completely resolved following the moves. His paraspinal neck muscles ‘melted’ during the treatment and his asymmetrical jaw actually straightened somewhat. I told him he had a big issue with his jaw and the bones in the base of his skull and he then relayed details of several traumatic injuries that he had received including a past history of fracture.

On the third visit he stated that he had begun noticing some interesting sensations in the affected areas and that he could feel ‘things happening‘ in his face and so he was very keen to continue with the treatment.   I was particularly interested when he also stated that he was feeling ‘ten years younger’ because he felt he could move about with more agility and balance and much less stiffness.  I reassessed and treated the primary sites but they were still responding nicely and the tissues were becoming softer and more elastic with the passage of time.

At the fifth treatment he stated that he could feel more sensations and some movement returning to his face.  I asked him to try wrinkling his forehead.  The tissue that had previously been non-responsive was now quite wrinkled, indicating that neuromuscular function was returning.

Over the next three months the condition continued to improve to the point where facial nerve function had fully returned and he said he felt he had returned to normal.  I still see him on occasion for check-up treatments and he remains healthy in this area.

The Vestibulocochlear Nerve (CN VIII) transmits information from the inner ear to the brain.  This allows us to hear sounds and to enjoy a normal sense of balance.  It passes along a narrow opening in the temporal bone as it exits the skull.  This narrow opening is called the internal auditory canal.   Clinically, conditions involving a disturbance of balance, such as vertigo, may respond well to moves and procedures that resolve abnormal tension in the sternocleidomastoid muscle (see Case Study B).

A thirty year old female presented to the clinic complaining of vertigo.  She described significant bouts of dizziness that included severe ‘spinning’ of the room. She told me the symptoms were worse when she changed position (such as on sitting up after lying down) and with particular head movements.

Assessment of tonal asymmetry revealed her left leg appeared more than an inch shorter than the right.  Screening was unremarkable however the paraspinal tissue on the right side of her neck was terribly tight, as was the right sternocleidomastoid muscle.  Bowen moves over the Sternocleidomastoid muscle were used to release that tissue and the release was immediately accompanied by a return to symmetry (the leg-lengths now appeared equal).

The patient responded favourably to the treatment.  Her vertigo was vastly improved after the first session and, following the second session, her symptoms completely resolved.  I saw her for a third treatment session several weeks later where she demonstrated tonal symmetry and stated that her symptoms had not returned.

The jugular foramen is made up anteriorly by the temporal bone and posteriorly by the occipital bone.  Several cranial nerves pass through this space including the glassopharyngeal, the vagus, and the accessory nerves.

The Glassopharyngeal Nerve (CN IX) regulates saliva production and flow, contributes to our sense of taste, and supplies structures in the throat region.  It is also involved in the action of swallowing.  Clinically, the Sternocleidomastoid Procedure may be indicated in treatment of patients with disorders of the throat, such as pain and constriction, difficulty swallowing, laryngitis, loss of voice, pharyngitis, etc.  The very first time I ever saw Ossie Rentsch treat a patient was in 1989 and it was for the treatment of hoarseness and loss of voice.  Of course, the Bowen moves he used were targeted to the sternocleidomastoid muscle and neighbouring tissues.

The Vagus Nerve (CN X) is involved with parasympathetic control of the heart, lungs, and digestive tract.  It also passes out of the skull through the jugular foramen.  I have heard many people describe and discuss specific moves to influence the vagus nerve but surprisingly, very few mention treatment of the sternocleidomastoid muscle.  The general indications of this procedure show it may be relevant in the treatment of digestive disturbance including vomiting, reflux and indigestion, as well as breathing difficulties including asthma, wheezing, coughing, and tightness of the chest.  When I worked closely with Mr Rentsch in the early 1990’s, in his Hamilton clinic, he told me that Mr Bowen often used moves on the sternocleidomastoid when he treated infants for colic and reflux (he used these moves in conjunction with the ‘asthma and colic moves’ that he performed on the abdomen).

In a clinical context, it stands to reason that resolving abnormal tension in the sternocleidomastoid will influence the function, position and movement of the temporal bone and that this in turn may influence the function of the vagus nerve as it exits the skull through the jugular foramen.  This explains how the Sternocleidomastoid Procedure offers potential benefits to the function of the digestive and respiratory systems.

The Accessory Nerve (CN XI) supplies the sternocleidomastoid and trapezius muscles and therefore plays a critical role in head position and movement.  Given the principles already outlined above, and the fact that the Accessory Nerve also passes through the jugular foramen, it is not surprising that the Sternocleidomastoid Procedure is also indicated in the treatment of pain and stiffness of the neck, shoulder, and jaw.

The clinical indications of the Sternocleidomastoid Procedure (as described in A Textbook of Bowen Technique) are closely related to the temporal bone’s intimate contact with a number of cranial nerves (i.e. CN VII – XI).